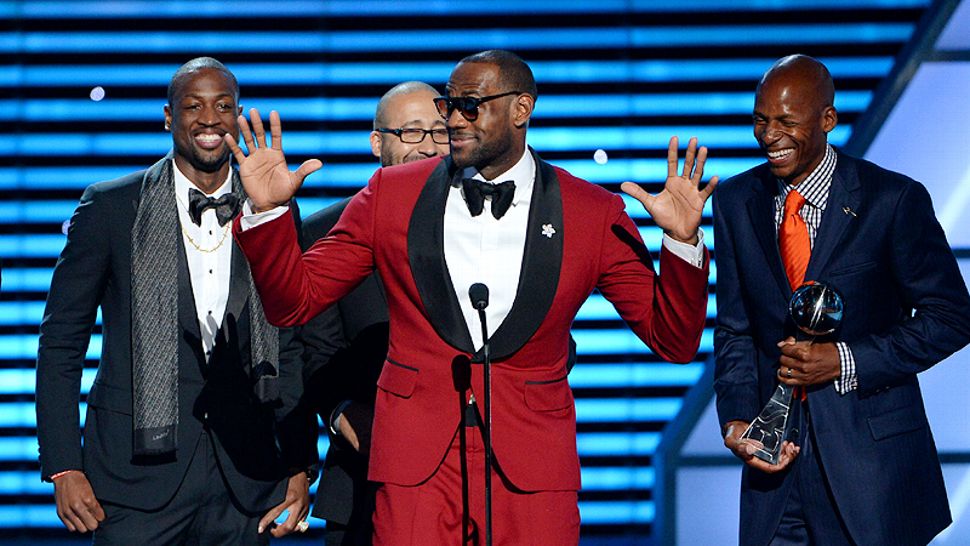 We know you want to know who won what, well here is the list :

Best Breakthrough Athlete: Quarterback Colin Kaepernick, who started the NFL season on the sidelines before helping the San Francisco 49ers to a spot in the Super Bowl.

Best Upset: Florida Gulf Coast, which became the first No. 15 seed to advance to the Sweet 16 in the NCAA men’s basketball tournament.

Best Moment: Jack Hoffman, the 7-year-old Nebraska Cornhuskers fan battling brain cancer who broke off a fourth-quarter touchdown run during the team’s spring game. As his father spoke after accepting the award, Jack held the big trophy that blocked part of his face.

Best Coach/Manager: Rick Pitino, the Hall of Famer who became the first coach to win national titles at two different schools by leading Louisville past Michigan in the Division I men’s basketball final.

Best NHL Player: Sidney Crosby, who led the Pittsburgh Penguins to the top record in the Eastern Conference in 2013 with 56 points (third most in league) and 41 assists (second).

Best Male College Athlete: Johnny Manziel, the Heisman Trophy-winning quarterback out of Texas A&M, who became the first freshman in Football Bowl Subdivision history — and just the fifth player ever — to have 3,000 passing yards and 1,000 rushing yards in a single season.

Best Female College Athlete: Brittney Griner, the former Baylor center who wrapped up her stellar career as the NCAA’s career leader in blocked shots (748) and finished second all time in career points (3,283).

Best Male Golfer: Tiger Woods, who reclaimed the No. 1 ranking in the world and has a PGA Tour-high four victories so far in 2013.

Best Male Tennis Player: Novak Djokovic, the top-ranked player in the world who won the Australian Open for the third consecutive time in January.

Best Fighter: Floyd Mayweather Jr., who returned to the ring after a year’s absence to notch a unanimous decision victory against Robert Guerrero to improve to 44-0.

Best International Athlete: Usain Bolt, the Jamaican sprinter who raced off with three gold medals at the London Games and became the first back-to-back 100-meter winner since Carl Lewis (1984, ’88).

Best MLS Player: Thierry Henry, who helped the Red Bulls reach the playoffs with 15 goals and 12 assists in just 25 matches.

Best Driver: Ryan Hunter-Reay, who became the first American to win the IndyCar Series title since 2012.

Best Jockey: Joel Rosario, who rode Orb to a win at the Kentucky Derby.

Best Male Athlete with Disability: Jeremy Campbell, who set a Paralympic record in the discus and broke the world record in the event at the Triton Invitational.

Best Game: Miami Heat vs. San Antonio Spurs, NBA Finals Game 6, Spurs had a five point lead with 28 seconds left in the 4th quarter. The Heat rallied and tied the game on a Ray Allen 3-pointer with 5 seconds left. Heat went on to win in OT 103-100.

Images from Miami United vs Tampa Marauders match May 4th